Class of '37 by Hester Barron and Claire Langhamer 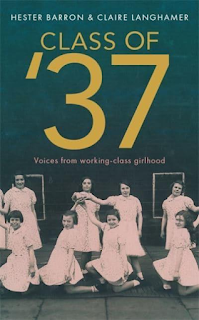 Class of ’37: Voices From Working Class Girlhood, by Hester Barron and Claire Langhamer, is an extraordinary book because it is about ordinary people. The voices of working class people through the ages have seldom been heard. And the voices of working class children, specifically girls, are heard even less often. We all know the cliche “history is written by the victors”. Well, it’s true, but history is also written by the rich. There are novels of working class life, from Robert Tressel’s The Ragged Trousered Philanthropists through to the angry young men (and women) of the fifties, to modern classics such as Shuggie Bain. These are important works, all of them, because they catch the rhythms and the idioms of their working class subjects but for all their importance as chronicles of ordinary lives they are still essentially works of fiction. The true voices of the working class, meanwhile, remain concealed behind the “respectability” or “properness” that informed so much historical record over the years. No one wanted to hear from these people.

The Imperial War Museum’s Forgotten Voices projects covering the First and Second World Wars, Burma and the Falklands, gave voice to ordinary men and, sometimes, women who explained the impact of war on their lives. They were mesmerising for the way they brought to life people whose lives would otherwise have been neglected. But they told of life in wartime, life under stress, life away from the norm. So, still, we weren’t hearing the voice of authentic working class lives.

Enter the Mass Observation movement. This was a research project that began in 1937 and ran through to the 1960s. The aim was to record everyday life in Britain, using observers who would record the conversations and behaviours of ordinary people and issue questionnaires and diaries on various topics. One can question the efficacy of this approach, and the research methodologies used wouldn’t stand up to modern academic standards but, for all that, Mass Observation has given us a treasure trove of thoughts and actions and stories from people who would otherwise be totally lost to history.

One of the first studies was in Bolton and it is this material that Barron and Langhamer have formed into their beautiful book. In the Mass Observation archive they found thousands of pages written by working class boys and girls, giving us a unique insight into their worlds, their thoughts and beliefs, their hopes, their fears. This is the untrammelled voice of working class childhood and it is astonishing to have these children come to life in front of your eyes.

We follow in particular a group of twelve- and thirteen-year-old girls from Pikes Lane Elementary School, who were given a series of essays to write by their teachers on subjects such as “heaven” or “the Royal Family” or “how I spend my holidays” or “What I learn at home that I don’t learn at school”. Through these essays we are drawn into the lives and thoughts of these girls and in the course of the book we come to know them. We are also given the pen pictures written of them by the Mass Observation observers and we can see how wrong those observers sometimes were, the lazy generalisations and casual prejudices that lay behind their impressions of the girls they were studying. Through the girls’ essays we can see beyond these generalisations into the sophistication of their thought, the ambitions they held – sometimes modest, sometimes not but always strongly held – and we see how the poverty of the times and the lack of opportunity shaped their existences. Most of them came from families who had worked for generations in the mills. Escaping the mills was a common aspiration. Some girls wanted to work in shops, others to become hairdressers, others to enter nursing. All of them, whatever they wanted for their lives, spoke of their ambitions in clear and moving prose.

What makes this book even more poignant is that once they had finished their research the authors contacted the families of these girls. Many of them still lived locally, and they were happy to talk about their mothers, and were even happier to read the words their mothers had written as young children. And so we learn which of the girls achieved their ambitions, who lived full lives, whose lives were cut short. The authors write movingly of talking to their feelings as they talked to the families:

[they] are mostly grandparents themselves now. It was oddly disconcerting to hear these elderly voices telling us about their mothers, who lived in our minds so vibrantly as living, breathing twelve- and thirteen-year-old girls. It felt the wrong way round, as if the generations had been swapped.

Class of ’37 is a gem of a book, bringing to life a cast of wonderful and vibrant young girls. History is written by the rich, and somehow we have to find a way of changing that.