What You Call Free by Flora Johnston 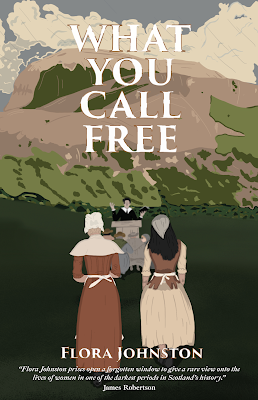 I suspect if What You Call Free was written twenty years ago, or even ten years ago, it would be a very different novel. Instead of the two women – both real historical characters – around whom the novel revolves, the central character would have been James Renwick, the charismatic and driven Covenanter who was ultimately martyred for his beliefs. Helen Alexander, a principled, fiercely independent and intelligent woman, would have been relegated to a supporting role emphasising the charisma of Renwick. And Jonet Gothskirk, a young woman from a poor family, would not have appeared at all. She simply wouldn’t have existed.

Flora Johnston’s brilliant historical novel tells the story of a dark period in Scotland’s history – the conflict between the Covenanters and the Crown – through the prism of these two women and in so doing casts a wholly different light on the times. To be a Covenanter in the 1680s was brutally dangerous and the story of James Renwick and his righteous – if foolhardy – attempt to take his fight directly to the agents of the Crown is a tale of jeopardy and despair.

But overlaid on this story of religious conflict are plotlines which reveal how difficult it was to be a woman in those times. Helen, every bit as principled as James Renwick, suffers terribly for her faith, both physically and mentally. She holds her family together despite constant threats of reprisals and punishment. She is the beating heart of decency in a truly frightful world.

And Jonet Gothskirk, a young woman taken advantage of and left pregnant, is the most luminous creation of all. Until now, Jonet was literally only a name recorded in history: in the minutes of the West Calder Kirk Session from 1687, an eighteen-year-old woman called Jonet Gothskirk was sentenced to wear a sackcloth gown in front of the congregation for weeks on end as punishment for becoming pregnant out of wedlock. The inspiration for Flora Johnston to write Jonet’s story came when she saw that sackcloth gown in the National Museum of Scotland. In What You Call Free, Flora gives the unfortunate Jonet a voice she never had in reality and brings her alive, enabling a woman who died over 300 years ago to force us confront some uncomfortable truths in our contemporary world.

Much has changed, and we can be grateful for that. But is it enough? In the conflict between state and subject, are dissenting voices sufficiently listened to? Is tolerance real or illusory? And what is the position of women in society? We may not force people to wear sackcloth any longer, but the title of this novel, What You Call Free, is still a rallying call for faithfulness – in both religious and secular terms – and for the strength of people to live their lives according to their own convictions. It speaks of hope, yes, but it is a hope whose origin is in the societal double standards which exist still and which mean that in 2021, like 1687, the world is still an uncomfortable place in which to be a woman.