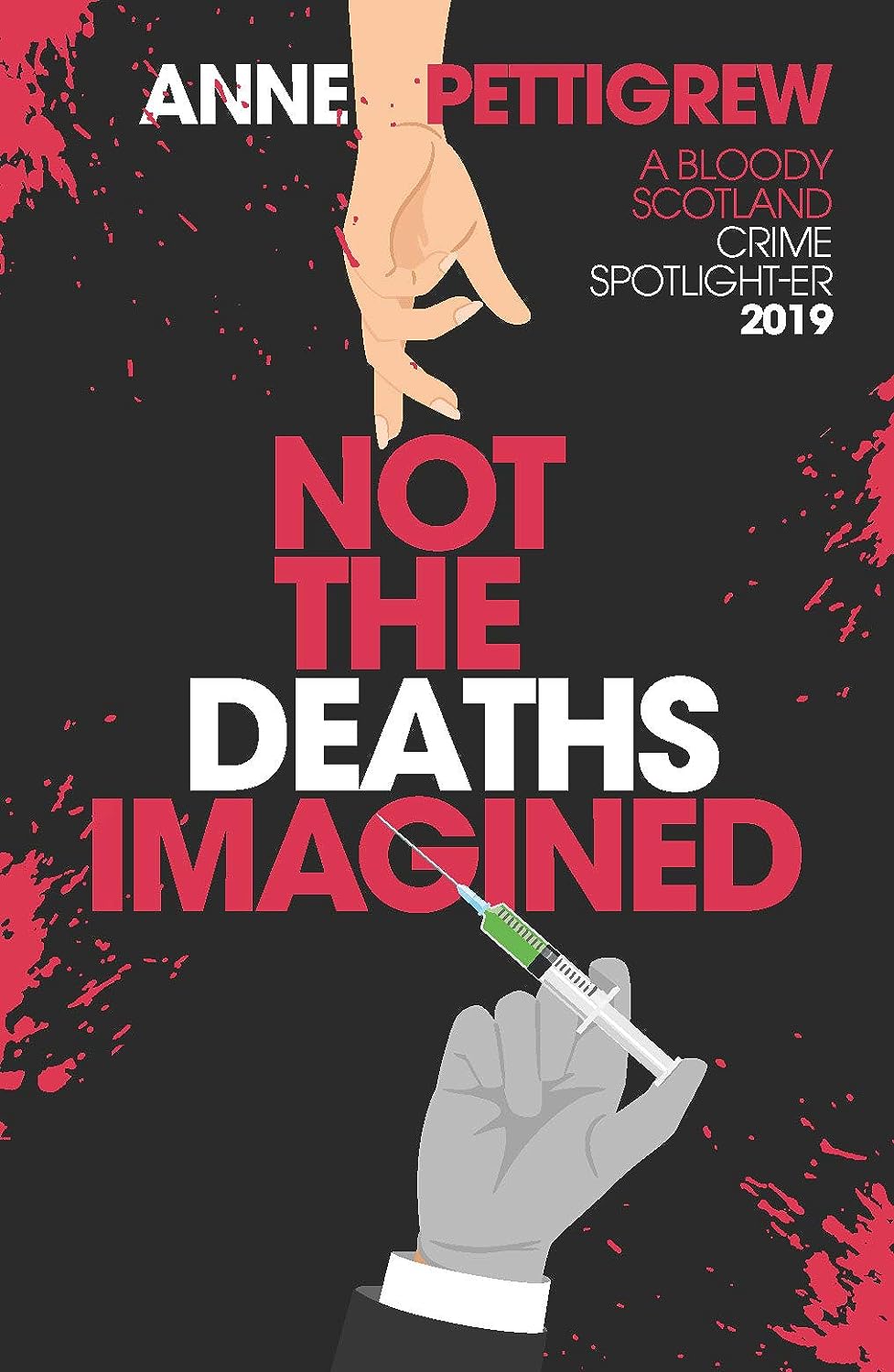 
Beth Semple, the narrator of Anne Pettigrew’s terrific first novel the medical Tartan noir Not the Life Imagined, is back in an even better sequel, Not the Deaths Imagined. Still a GP in Glasgow, Beth becomes embroiled once more in a story of deaths and deceit and dodgy doctors. This time, though, Beth herself is in jeopardy, along with her family, and the book gallops along to a rousing and frightening climax.

As with the first novel, Not the Deaths Imagined is mostly narrated by Beth herself, and we get her highly moral, utterly decent view of a world which becomes increasingly murky. Interspersed throughout, though, are third person interludes where we are taken into the viewpoints of the other characters, particularly the dodgy ones, and this gives the novel a pleasing balance. The story unfolds and the reader is taken on the journey of good (Beth) and evil (David Goodman). We know a clash is coming and we wait nervously for it to happen. Supporting Beth along the way are a number of her friends whom we first me in Not the Life Imagined.

David Goodman is a doctor in another practice in Glasgow, one with which Beth’s practice has a reciprocal agreement for out of hours cover. It is during one of these occurrences that Beth is asked to sign a “Part Two” form for a recently deceased patient, permitting the body to be released for cremation. Beth, unable to honestly say she can agree the cause of death, refuses to sign. This honest, dutiful act sets in train the frightening events of the novel.

Goodman, it becomes clear, is a multiple killer, bumping off his more elderly or vulnerable patients having first ensured their wills have been changed to include him. Nothing much, not more than £5000 or a painting each time. Not enough to draw attention. Enough to be lucrative. Besides, there is the thrill of the act, which never diminishes.

Goodman is clearly insane, and it is notoriously difficult to write such characters effectively. Either they are too normal and the reader can’t buy into it, or the writer tends to ham things up so much the character ends up like Chief Inspector Dreyfuss in the Pink Panther films, driven to raging madness by Clouseau and his incompetence. Anne Pettigrew avoids these extremes and in the process she creates a deliciously monstrous villain.

It is obvious from reading the novel that the author was a GP herself. Her familiarity with medicine and general practice gives an air of authenticity and credibility to the drama that unfolds, so that you can implicitly believe what you are reading. Not the Deaths Imagined rattles along pleasingly and the reader is drawn into Beth’s increasingly frightening world, willing the deaths imagined not to include her or hers. In a dramatic climax, the answer to that hangs in the balance...
at August 13, 2020 No comments:

Paul Cooper, a lonely, insular schoolboy from Salford, should probably be taken into care. His mother, a depressive, can barely cope with motherhood. She goes out with her girlfriend and leaves her son to sort his own tea of pizza and lagers. His father has disappeared, thrown out of the house years ago. His sister has left home. All he has is birds, which he learns about assiduously, even obsessively from a Field Guide to British Birds, itemising how many he has seen in the wild. 186, 187, 188. The one he wants to see more than anything is the raven. Ravens are outsiders, too, living their own way, carrion-feeders for the most part, solitary. Paul would decry the anthropomorphism in this observation, but the raven is the bird-world encapsulation of Paul’s own nature. Not that he knows this.

King Crow is a remarkable novel. in many ways. With the lonely boy and his love of birds there is an inevitable link to Barry Hines’s Kes, despite the Pennine barrier between the two novels’ settings. I am also greatly reminded of Daniel Shand’s Fallow, another road novel in which, from the outset, violence is inevitable (although it should be noted that King Crow predates Fallow). I think, though, the novel it most reminds me of is Patrick McGrath’s Spider, although if you haven’t read Spider I would urge you not to Google to find the reason why before you read King Crow because doing so would deliver a huge spoiler, and that would be a great shame, because Michael Stewart makes an excellent job of the sleight of hand which lies at the heart of this novel.

Recently moved to a new school and friendless, Paul becomes fascinated by a fellow pupil, Ashley, who seems to Paul to be everything he isn’t. Confident, brash even, handsome, tough, he is someone Paul can look up to. An unusual friendship develops in even more unusual circumstances, the consequence of which is that the two boys find themselves on the run, pursued by a criminal from whom they have stolen a bag of drugs. The novel thus becomes a road novel, but like none you’ve ever read before.

For starters, they decide they will go to Cumbria, in search of Paul’s beloved raven and tramp the hills in search of birds. They meet up with Becky, middle-class, a raver on the look-out for adventure. In Cumbria and meet a hermit. From there things spiral...

Interwoven throughout are Paul’s meticulous explorations of different birds. These are beautifully written. Stewart is a fine writer about nature, in the manner of Jon McGregor or Melissa Harrison. Thus, as well as being a road novel, it’s also a piece of natural history. You will learn fascinating details along the way – there is no such bird as a seagull, for example – but the writing is so good it never seems didactic. Rather, Michael Stewart uses these digressions into natural history to explore the character of Paul. Brett Easton Ellis did the same thing with the music criticism interludes in American Psycho, and Stewart’s handling of what is a genuine technical challenge is impressive indeed.

I’ve compared Michael Stewart to quite a number of different authors in this review, and done so deliberately, because there are echoes of each of those in his prose. But while he may share attributes with these writers, he synthesises them into something entirely unique.
at August 06, 2020 No comments:

Not The Life Imagined by Anne Pettigrew 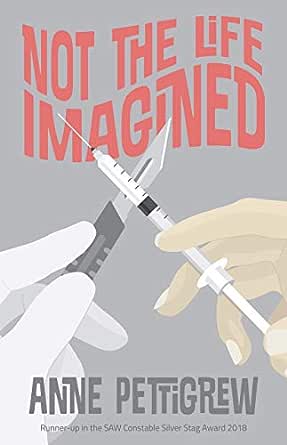 There are portents from the outset that Not the Life Imagined, a story about a group of medical students in the 1960s and 1970s, is not going to be your classic comic tale of medical misadventures and ineptitude, with James Robertson Justice BELLOWING across every scene at the “blathering idiots” under his charge. We are told, right from the start:

When did you last see a physician or surgeon? Were they charming, knowledgeable, reassuring and trustworthy? Are you sure? I’ve known some who are not as they seem. They had other agendas. One is dead and the other awaits his fate, just like me.

It is clear, then, that there is going to be darkness in this novel. And yet it is a richly humorous story, and medical misadventures and ineptitude abound. But these escapades are not, as with Richard Gordon or the like, the point of the novel, but its backdrop. We are in a much more realistic world and, as the novel unfolds, its loosely connected moments gradually coalesce to form something darker and deeper.

Most of the novel is told through the eyes of Beth Slater, and it is Beth who provides the novel’s moral compass. She is one of a group of students who arrive at Glasgow University to study medicine in 1967, a working class girl, naive and principled. Her classmates are a diverse bunch, all of them flawed in the way every human is. Over the course of the twenty or so years encompassed by the novel these flaws are itemised and probed and, if not exactly judged, then certainly exposed to critical scrutiny. And with each moral failing, each moment of weakness, each capitulation to greed or fear or plain desperation, the characters become more human, more like us, more like a mirror in which we can see our own flaws and frailties.

Not the Life Imagined is part bildungsroman, part crime thriller, part psychological character study, part comedy, part feminist admonition, part history of the NHS. Each of the characters arrives at university hopeful and ambitious, with ideas about how their lives will unfold. Life, of course, has its own trajectory and anyone who thinks they are in control of their own destiny is closing their eyes to reality. The reality, in Not the Life Imagined, is sometimes tragic, often traumatic, frequently amusing, but always compelling.
at August 04, 2020 No comments: